Being a single mother was much, much harder than Valerie had anticipated, especially without any money. Between looking after Amelia, tending to her garden, and fishing every spare second, she didn’t have any time to sleep and found herself occasionally relying on herbal remedies instead of sleep. Still, she knew it would all be worth it for her daughter to have a strong start in life.

With the selection of tuna and salmon she’d caught, it was already paying off as she’d managed to expand her house enough to make room for everything Amelia would need to learn important skills as a toddler, skills which would set her up for her future life. When she got to see the progress she was making in her house, Valerie knew it was all worthwhile. And the house expansions couldn’t have come soon enough! No sooner had the work finished, Amelia’s birthday came and she grew up into a toddler, old enough to begin moving around and forming opinions on the world around her. She was a little precocious, but sweet enough that nobody held it against her. She headed to bed early, along with her exhausted mother, almost too excited by her new bed to sleep. But not quite; she still drifted off as soon as her head hit the pillow.

In the middle of the night, a stranger snuck into the house without waking mother or child. But although she was a stranger to them, they were not strangers to her, and she was there on a very important mission.

Lilith, also known as Goth Girl, made a beeline straight for the sleeping Amelia, as per her leader’s instructions. But as she saw the tiny child sleeping soundly, surrounded by toys that everyone knew her mother had worked so hard to provide, she couldn’t do it. She couldn’t take the child away from everything this early. It was as if her long-dormant maternal instinct finally woke up to insist that she couldn’t separate a mother from her baby, that it would be the most evil thing she could do. So, instead, she turned around and changed tact.

She hypnotized Valerie and summoned her from her bed. “You will give us your child,” she said in a flat, soothing voice.

“I will give you my child…” Valerie replied lifelessly.

“You will raise her to respect Forgotten Hollow,” Lilith continued, beginning to struggle a little with holding the hypnosis for longer than a few seconds.

“I will raise her to respect Forgotten Hollow…” Valerie replied, once again, in a monotone voice.

“You will befriend Caleb Vatore, and allow him to take your child as his bride,” Lilith concluded, rushing a little as she struggled to maintain the hypnosis.

“I will befriend… Caleb… allow him to take… Amelia…” Valerie trailed off as she lost consciousness. It had worked. It was a close call, but it had worked.

Always the opportunist, and keen to place an extra confirmation in place that Valerie wouldn’t remember the conversation, Lilith relieved her of a hearty amount of her sweet plasma, before slipping out the door as if she’d never been there.

Valerie collapsed on the floor and woke up three hours later, confused as to how she’d got there, but otherwise none the wiser as to what took place that night. 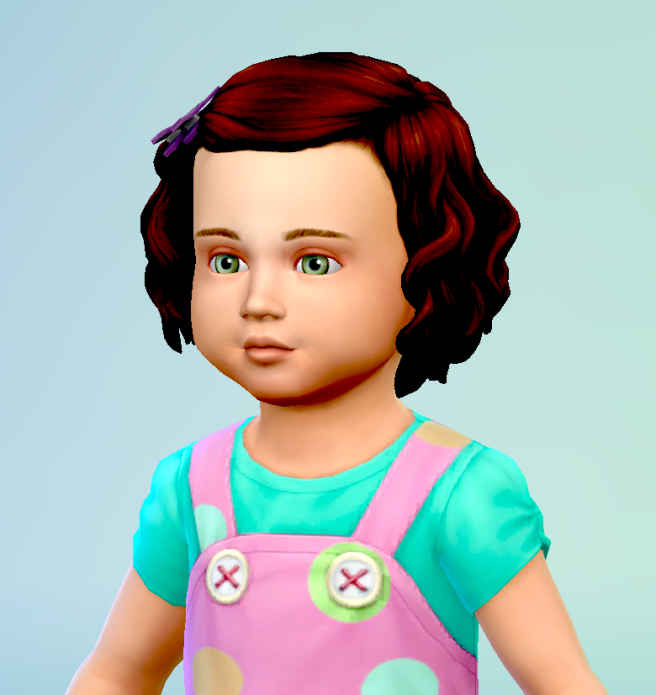 The next morning, Valerie decided to give Amelia a makeover. While her dungarees were cute, they didn’t suit her charming personality. Valerie made her a new dress, and used some of the fertiliser from her garden to grow Amelia’s hair long enough to style into a cute bob.

Once she was happy with Amelia’s new look, Valerie headed out to her garden to plant some lilies she’d found a few days earlier growing near the river. There wasn’t long left of Summer, so she knew she’d only get one harvest if she was lucky, but they sold for so much that she knew it would be a worthwhile investment. She began to consider building a greenhouse to keep out of season plants in, but it would take a long time to save up enough money to build a whole new structure on her lot. While Valerie worked on her garden, Amelia loved to toddle around the plants and feel the sun on her skin. Although she didn’t have much, she wasn’t old enough to know how little she had, and so managed to enjoy every toy and every one of nature’s gifts. Valerie hoped her innocence would last long enough for her to raise enough money to build her a proper bedroom, at the very least. When she wasn’t gardening or fishing, Valerie was finding she had a real affinity for helping Amelia learn her basic skills. It wasn’t something she’d been expecting, since she’d never been particularly good in school, but it was fast becoming one of her favourite parts of the day when she got to spend time learning with her daughter. Sometimes Akira would come over and help out with the lessons, and their bond grew deeper with each passing day. Akira didn’t even seem to mind how slowly Valerie was opening up to him. He just seemed happy to get to be a part of their tiny family. Amelia, however, often got jealous of the affection her mum would show to Akira, and gave him the stink-eye every chance she got. Akira knew that it didn’t mean anything, but he still couldn’t help but feel a little disappointed by it. He hoped it wouldn’t be long until she would warm up. He helped Valerie tuck Amelia into bed that night, before catching the train home to San Myshuno. He still hadn’t been allowed to stay the night, but he was a patient man, and from what little he’d heard about Johnny, it wasn’t at all surprising that Valerie would want to take things incredibly slow.

After Akira left, in a somewhat dazed state, Valerie found herself feeling a strong urge to go and order some food from the local vendor. She made her way over, and felt compelled to have a chat with him before ordering, despite how much of a fool she’d made of herself the last time they’d spoken.

“Hey, Caleb,” she said cheerfully. “How are things going?”

“Very well, thank you, Valerie,” he replied with a toothy smile. “How are you?”

“I’m doing alright, thanks. I feel so tired all the time at the moment, though! Did you know I had a daughter recently?”

“I’d heard rumours,” he replied, a gleam in his eye. “It must be exhausting looking after her alone. If you ever need a babysitter, please feel free to give me a call. I’m great with kids!”

Valerie was touched by his sweet gesture, and grinned widely. “That’s incredibly kind of you, thank you! If I can take a day off, that’ll give me a chance to have a proper, grown-up date with this guy I’m seeing, no toddlers involved. Can I take your number?”

Caleb scrawled his number on a scrap of paper and handed it over. “Feel free to call me any time, but generally I’m more available after sunset… You know, with working the stall, and everything.” Valerie didn’t seem to notice the strange way he’d phrased it, and he almost sighed out loud with relief.

She took the note and stuffed it in her pocket with a smile. “Thanks, Caleb, that’s incredibly sweet of you.” She wandered off home, forgetting that she’d ever intended to buy anything.

Note from the Author: I had so much fun writing this one! I hope you like it 🙂 It’s hard to believe I’ve hit ten chapters already, it feels like yesterday I started writing! If you have any feedback for how I can do better please let me know. I tried to take nicer screenshots this time, I don’t think they’re quite where I want them to be yet but I like them a little more than previous ones! Next chapter coming on the 11th at 7pm GMT.

Hi, I'm Elin and I really love The Sims! Some of my fondest childhood memories are of waking up at 5 in the morning so I could sneak onto the family computer and play The Sims before anyone else woke up. View all posts by elinsims